If, when starting a cookie company, your first batch of cookies comes out burnt ... maybe it’s a sign that your company could try selling something else! Which is exactly what the guys behind Maui and Sons did, slapping those cookies on their logo and starting an incredibly successful lifestyle brand instead.

How did they go from selling cookies to selling surfboards? It was the 80s. With hairstyles that could defy gravity like they did, how can we question anything else? The pivot was definitely a good choice - Maui and Sons is here in 2016 and strong as ever. 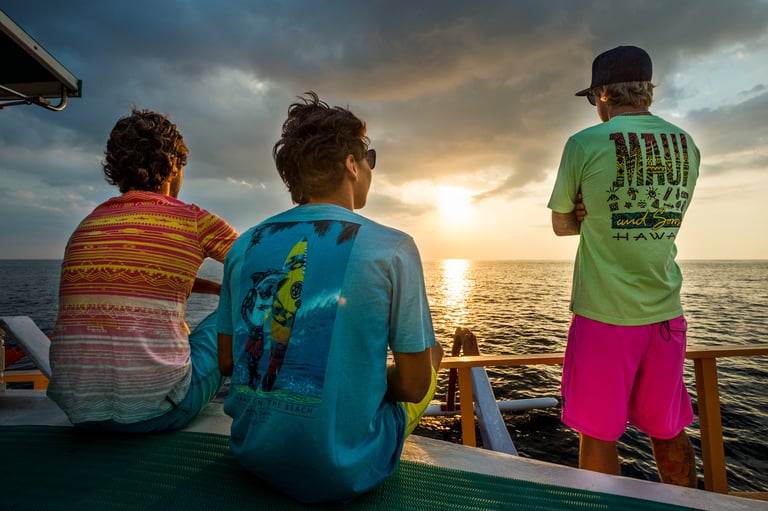 About 4 years ago, they expanded across the ocean, and Maui and Sons Europe began doing its own thing. The European operation is under the US brand, but operates separately.

We spoke with Supply Manager (his official title) and SEO expert, website designer and product tester (his unofficial, but just as important titles) Tony Gale about Maui and Sons Europe: how they’ve expanded in the last few years and how they’re driving the push for modernization in wholesale and retail operations.

Maui and Sons Europe takes artwork and designs from the US, but when it comes to the day-to-day running of things, they’re autonomous, and can make business decisions on their own.

Europe, USA or anywhere in between, Tony explained that Maui and Sons is all about a lifestyle:

“We’re a lifestyle company. We’ve been around since the 80s and have always been about the cool California lifestyle. This is an exciting place to be, very friendly and open to innovation.”

Tony has been with the company since 2013, when he started out as a sponsored athlete for the brand. As he joined the company as Supply Manager, as you might expect from a professional skateboarder, he wasn’t satisfied with the status quo.

He began to push for the modernization of inventory practices that were stuck in the 80s. Now, Maui and Sons Europe is driving the push to modernize the entire brand’s processes and operations.

Maui and Sons Europe designs almost all their wheeled goods in the European office. Clothing, accessories, and food and beverage products come from the US side.

They work with a 3PL in Europe to warehouse some items. For example, they have one warehouse that specifically handles B2B orders of wheeled goods. Maui and Sons used to rely entirely upon offline sales, in person or at trade shows, but began to see the need to make things happen online as well.

Before finding TradeGecko, operations at Maui and Sons Europe were very….manual. With a team of 5 people, there wasn’t much communication, and selling goods that were already promised to someone else was a regular occurrence.

“Before TradeGecko, we had a team of 5 people in the office and the left hand never knew what the right hand was doing. We would go into high-end shops, sell a bunch of stock, only to come back to the office and find out that inventory had just been sold by someone else.”

Although the designs and brand proved timeless, spreadsheets and disorganized practices definitely were not.

Tony found TradeGecko while looking for a solution that would integrate closely with their existing Shopify store. They found it simple to get set-up with TradeGecko - basically they just needed to do a direct import from Shopify.

However, the problem was getting this decades-old business ready to move into the cloud. Dealing with archaic practices that needed to be modernized up was a challenge, but they were able to clean up their inventory and get everything into TradeGecko - enjoying the functionality and ease of use.

Once they started using TradeGecko, they saw an immediate difference in the efficiency in their day-to-day.

“It’s almost impossible to quantify how much TradeGecko has helped us when it comes to accuracy and efficiency - comparing what we had before and what we have now, it’s like 2 different worlds.”

Maui and Sons Europe uses our B2B eCommerce platform. It’s helped them overall, but they’ve found it especially useful for smaller clients or those who prefer self-service. “We give our customers logins for the B2B platform and they are able to go in and place orders as and when they need it. This helps us get sales in places that would have taken much more effort.”

“We also have other, bigger clients who put in all their orders in through the B2B platform, on a regular basis. They place huge orders through the platform and that’s something that we barely have to touch or interact with - a great and easy platform to use.” The most obvious benefit of using TradeGecko has been having centralized stock control to eliminate their previous problems of overselling stock.

“The ability to assign stock to a particular client in a particular order, managed in the cloud, accessible to all, no matter where they are in the world has been a huge help.”

Maui and Sons Europe is opening up retail sales channels for the company - developing direct B2C eCommerce in both Europe and the States. B2C started off as a side thing, more of a proof of concept if anything, until Tony saw the opportunity for more.

They had the infrastructure to fulfil B2C orders, so they decided to give it a try. “If you can do B2C from wholesale, why not? It's just another source of revenue."

Future of Maui and Sons Europe

Maui and Sons Europe is all about the growth. They’re expanding their office and are looking to hire sales reps for each line of product, rather than having one person handling it all. This is facilitated with TradeGecko and the extra ability to control who sells what.

Even better, the US office of Maui and Sons has seen what positive changes have occurred in the last few years and are following suit. For the next few years, they want to expand into different marketplaces, focusing on selling directly to consumers, while still keeping wholesale business going strong.

Clearly Maui and Sons Europe is taking something good and simply making it better. The next time we have a craving for a bit more of a laid-back lifestyle, we’ll slip on a Maui and Sons t-shirt, hop on one of their skateboards, grab a cookie and let the California vibes wash over us - wherever in the world we happen to be.

Find out more about Maui and Sons Europe here.

FCTRY: where art, product and eCommerce come together

CareBOX Program: giving strength in the face of cancer