Harbolnas, Indonesia’s annual online shopping day, is held each year on December since it was first started by Lazada Indonesia in 2012. We discussed the logistics of it all in Part 1, and how much of success it has been. In this second part, we’ll talk about the flip side - issues and challenges that came up during the sale.

The Dark Side of Harbolnas

It’s not all fun and discounts for the participants of Harbolnas. As with any situation where there are big bucks to be made, there’s a dark side. Even though Harbolnas was founded in the spirit of cooperation, there are always some companies that want to try to get a leg up on the rest.

Thomas Diong, Head of Data at Salestock, a B2C eCommerce platform explains: “The purpose of Harbolnas is to encourage companies to stop competing so hard against each other and work together to educate people to buy online. We want to increase trust in the sale event itself and create a market together.”

He adds, “Recently though, we’ve noticed a few companies have become selfish and started tricking customers. This damages the entire eCommerce market, and ends up hurting the industry as a whole.”

He also knows that in order to be more competitive, companies spend a lot on advertising. As a result, sometimes those who end up winning the most aren’t the retailers - but huge advertisers like Facebook and Google.

In previous years and again this year, there were instances across many platforms of “fake discounts”, where certain sellers showed a discounted price, from a fake and inflated original price, giving the illusion that the sale was much better than it actually is.

These cases bring up good questions and potential challenges that need to be addressed as the eCommerce market grows even more: Where does the responsibility to the consumers lie? On the sellers themselves, or on businesses like Lazada? 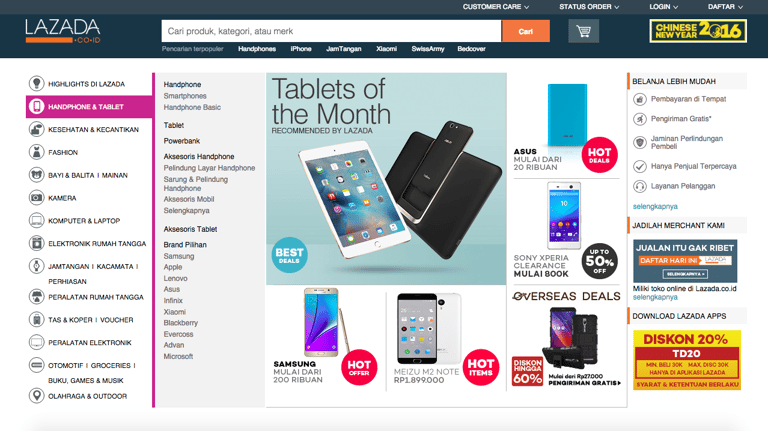 Lazada’s opinion on this is clear: they take responsibility for these sellers, even if they’re not able to catch them in the moment. Indonesia CEO & Chief Strategy Office Magnus Ekbom explains, “During the Harbolnas campaign, Lazada offers more than 300,000 different great deals to our customers. We ship them to Java, Sumatera, Sulawesi, Kalimantan and all the way to Papua. We have noticed that there were incorrectly stated 'normal prices' for a few products.”

He continues, “This is normally captured by our Quality Control, but given the amount of products we offer during Harbolnas, some unfortunately slipped through. We apologize for that and continue to improve our quality control processes, which is at the heart of Lazada's promise of great customer experience. We also deactivated the seller from our platform.”

So, Lazada recognizes the responsibility of the platform to protect consumers. They ensure that they have policies in place to increase the levels of trust with the customer, and allow for compensation if the seller is tricked.

On an individual level, we hope that many companies will follow suit with the Harbolnas founder, but what about on a higher level?

It can be summed up in a simple answer from Thomas of Sale Stock: “Consumer protection? There is no consumer protection in Indonesia. Customers who are wronged can get mad, they can flood social media accounts with complaints, but other than that, there’s not much they can do.”

Which is why building trust with the customer is so essential, and it just shows how individual levels of customer service and protection can be the difference between a buyer choosing one site versus another.

He explains further: “Indonesia is still in the infancy stage in eCommerce, so trust is extremely important, but it sounds like there are many companies now who just want the short-term win. Consumer protection cannot be relied on. Seems like the only way forward is for more companies to agree that you have to protect your customer and treat them well.”

As far as the overall market goes, Indonesia recently opened up its doors for foreign investment in the eCommerce sector. As an appealing destination to run their business, is this new law a good thing?

Tech journalist Amir Karimuddin explains, “The emergence of Rocket Internet's properties (especially Lazada and Zalora) has accelerated the adoption of eCommerce In Indonesia. With a large untapped market, Indonesia is a sexy market for many investors, especially big-bucks foreign investors. The investment scene should be regulated, as in, the local partner should preserve majority vote/share, but new foreign investments are still welcomed.”

Lazada, an international player themselves, sees only advantages to the consumer as the market opens up to this foreign investment. “Lazada is the only eCommerce marketplace in Southeast Asia that has footprints in 6 different countries. We are able to communicate and learn from best practices derived from each market. This is the benefit that no other eCommerce marketplace has in the region.”

Thomas from Sale Stock also thinks things will only get better with more investment:

“It’s only good for the country, now eCommerce business owners can actually be based in Indonesia, rather than in Singapore, where they usually go. Overall, the whole industry will get better in terms of fulfillment, delivery, quality, customer service and prices.”

What’s next for eCommerce in Indonesia?

The success of Harbolnas seems to be a great predictor for the success of eCommerce in Indonesia for the future. According to those we interviewed and most people in the market, eCommerce will see growth, then consolidation, and improving standards, service and prices, something that will only be good for the Indonesian consumer.

“Indonesia is definitely going to be (if it’s not already) the biggest market around here. We see a lot of potential and that is why we, along with other successful eCommerce players are gathered here!”

Thomas Diong is confident that things will only get more and more competitive from here on out. “In the next couple of years, we’ll see lots more competition and massive influx and growth of eCommerce, then massive consolidation. At the moment, almost all eCommerce businesses are operating on a ‘growth at all costs’ model, so they will do anything to outgrow competitors. There will only be a few winners when consolidation comes, of course, everyone hopes to be a winner!”

Magnus Ekbom of Lazada also sees that growth in online shopping, both on web and mobile: “Harbolnas will continue to grow significantly over the years. More and more people are considering shopping online. This is made possible if not resulted from the increasing trust from Indonesian consumers toward online shopping.”

Harbolnas on a roll

With its good and bad, Harbolnas is just confirmation of one thing that’s for certain - the eCommerce market in Indonesia is absolutely here to stay and getting bigger every year. When will it slow down? It’s hard to say, but for now it looks like growth and expansion are the only things on the horizon.

Tips from our eBook - Inventory Management: Getting Started

Instagram and Indonesia: how social media selling is disrupting eCommerce