Bulging wardrobes, near-empty bank accounts and stressed shoppers - all the joys of an end of the year filled with retail sales and discounts. Of all the global sales that went on at the end of 2015, one in particular caught our eye: Indonesia’s online shopping day Harbolnas. What’s the ‘deal’ with it? We’ve got the details in a two-part series: what it is, who's shopping it, and how its popularity is helping to shape the future of eCommerce in Indonesia.

In this first part, read on for more information about Harbolnas. It’s a relatively new sale, but has quickly become one of the biggest in Southeast Asia.

Lazada Indonesia initiated Harbolnas or Hari Belanja Online Nasional (national online shopping day) on 12 December 2012 with six other retailers, giving it another nickname, the “1212 sale”. Since then, its participants grew to 140 online retailers in 2015 and has become the largest eCommerce event in the country. While officially the event lasts 24 hours, some retailers expand their sale period around the date to build up the hype.

We’ve spoken to Harbolnas veterans Lazada, and other eCommerce players and observers including Sale Stock, HappyFresh, Fabelio and DailySocial to give us some insights (good and bad), and an insider’s look at Harbolnas and Indonesia’s eCommerce ecosystem.

What is the current state of Indonesia’s eCommerce market? The VP of Marketing SEA at HappyFresh, an online grocery startup, Rizki Suluh Adi summed it up briefly and easily:

It’s an eCommerce market in its infancy, and challenges related to logistics and payment methods still exist, especially in the more rural areas. But the online behavior trends indicate growth for eCommerce in the next five years.

eCommerce is estimated to reach $25 billion in 2016. This huge number that doesn’t really surprise, rather it’s a testament to the growing trust and openness to shopping online.

Founders Marshall Utoyo and Christian Sutardi of online furniture startup Fabelio confirm the opportunities present. “The overall online shopping ecosystem is small and growing aggressively. There is a huge pie for everyone for at least the next 5 years. Everyone working together is great for the ecosystem and helps Indonesia move forward faster.”

So, where does Harbolnas come into things?

It was in that spirit of everyone growing together that Harbolnas was created. First and foremost, Harbolnas is proof of the idea that if you build it they will come (and shop).

Lazada Indonesia created Harbolnas, not only to see if they could bag the same results as other large sales days, but also to ask Indonesian customers in general: hey! why aren’t you shopping online? Try it out! And it was created with the idea that if all the eCommerce stores joined together, rather than competing with each other, they could accomplish bigger sales results.

Harbolnas isn’t only for retailers - other businesses jumped in to get a piece of the action. For example, Indonesia’s biggest telco Telkomsel worked with sites to allow for additional discounts if you use a phone number from the company, or certain apps, or pay from certain bank accounts.

According to tech journalist Amir Karimuddin, it’s definitely a big hit: “Harbolnas tries to replicate Black Friday (and recently Singles' Day in China). Great discounts are still the best way to promote your products, your brands, and your marketplaces. According to Nielsen, 76% respondents this year were aware of Harbolnas, while around $150 million sales were generated during this period.”

$150 million in sales? Not bad for a sales day that didn’t exist five years ago. So, who’s doing all the buying? 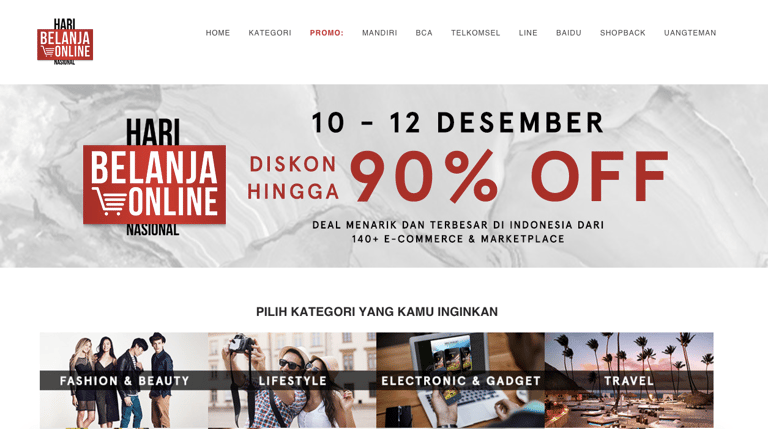 Overall, the customers on Harbolnas are a mixture: there are those who are tech-savvy and already shop online, but also those bargain hunters who don’t usually shop online, but can’t turn down a good discount. Brands generally get new customers on Harbolnas, but also have to keep in mind that those might be one-off buyers. The responsibility then falls on them to make customers want to return!

Since it’s not a regular shopping day, customer behavior changes a bit during Harbolnas as well. Retailers we talked to suggested that customers are more understanding if things don’t go 100% right, but that they also can get impatient.

HappyFresh began to see orders coming in at midnight, as customers become afraid of missing out on discounts. They noted:

“During big events such as Harbolnas, we’ve seen new peak hours for customers to shop. For example, when Harbolnas first begins, the peak hour starts at midnight then slows down until before dawn, then traffic increases again starting around 5AM until 11AM. This shows that customers are willing to visit our page during odd hours to make sure they get the best deals.”

Harbolnas this year, in sales

Harbolnas this year was the biggest in history, and most retailers we spoke to measure sales and revenue as compared to regular days of the year.

HappyFresh saw sales triple on Harbolnas. Furniture startup Fabelio was able to acquire a lot of new customers, and then saw those customers returning after Harbolnas, which is ideal for eCommerce start-up of their size. Many retailers saw, double, triple, or more in sales compared to an average day.

Veteran Lazada has identified some key trends as far as what people were buying, and how they were buying it this past year. Indonesia CEO & Chief Strategy Office Magnus Ekbom explained what the trends were for shoppers in 2015. Lazada saw that the mobile and tablet category was still one of their most popular, but they began to see customers also buying daily goods. They also saw growth in home appliances, fashion and toys sectors.

Payment using bank transfer is still the most popular payment methods among Indonesians, generally and during the sale. This is followed by similar amount of customer paying using COD and a much smaller percentage using credit card.

Pricing for the sales

Discounts during Harbolnas vary across the board, with some merchants offering 15% off, and other offering up to 90% off (although consumers had reason to be wary of too-good-to-be-true prices, more on that later). Each company chooses what sale strategy works best.

For example, Thomas Diong, Head of Data at Sale Stock, a B2C eCommerce platform, said their strategy was focused more on getting the word out about their company and less on discounts. Their prices are already the very lowest possible and so they focus in on creating awareness as their main goal.

On the other hand, companies like HappyFresh used discounts to get consumers to make an initial purchase on discount with the hope that they return if they’re happy with the service. They offered up to 50% discount during the sale weekend.

Technology for the sale

High traffic in previous years caused several major sites to shut down for a few hours during sales times, leaving frustrated customers and even more frustrated sellers. In trying to avoid it this year, many sites took extra precautions to make sure they were completely prepared.

HappyFresh co-founder and CTO Fajar Budi Prasetyo elaborated on the extensive testing that went into the preparations for the event. "We need to estimate how much traffic we're expecting for the event. And then whatever we come up with, we multiply it by two or three. We do load testing based on the number to make sure that the system can handle the expected traffic. Handling traffic spike is getting easier with the current cloud technology. Overall tech should be a non-issue for Harbolnas."

This is Harbolnas, a young sale that is only growing and growing each year that it’s held. Stay tuned for Part 2, as we take a more critical look at the sale: the darker side to all those happier customers, and how its growth and setbacks will affect the eCommerce market in Indonesia in the years to come.

Instagram and Indonesia: how social media selling is disrupting eCommerce

Why you should grow your eCommerce business in Indonesia: an eBook

Meet the product team at TradeGecko: improving our product one interview at a time