Indonesians are masters of selling through social media. Using a multichannel sales approach, they’ve added social media as a legitimate and lucrative channel. Read on for how they’re doing this and what lessons you can apply to your own eCommerce business.

A high profile Indonesian fashion blogger finishes editing her latest Instagram post. In the photo, she’s walking down the street, wearing a new dress from a small fashion brand. She makes her final adjustments, clicks “share” and sits back for a coffee break. The entire post took her about an hour to put together, and she’s just made around US$500, an amount that deserves a break indeed.

This Indonesian blogger is also a buzzer, someone who is paid by fashion brands to put up posts featuring their clothing on Instagram, Twitter and other social media platforms. There’s a huge market in Indonesia for this type of influencer. Why? Because being featured in one of these Instagram posts can mean new customers and a big spike in sales. And because most of those brands paying the buzzers are selling their goods directly on Instagram.

Indonesians are redefining the role social media plays in eCommerce. Namely, they’re taking social media, which is generally seen as more of a marketing/branding channel and turning it into a legitimate (and seriously profitable) sales channel in itself.

Especially in rural areas, where shopping malls are few and far between, social media platforms like Instagram are filling in the space for Indonesians who want to go shopping, but don’t have anywhere to do it. This is creating a separate eCommerce ecosystem of buyers, sellers, buzzers and some very successful Instagram accounts.

It seems that Indonesians are simply really good at finding unconventional ways to sell stuff. I recently spoke with tech blogger Aulia Masna, and he explained how the eCommerce market on Instagram opened up.

Ever since Indonesians knew that they can sell items online, they’ve been using almost every existing channel to sell things, whether it’s personal effects or used items. These channels aren’t just limited to social media, but messaging applications as well.

He explains that one of the earliest online channels, Kaskus, was used as an eCommerce platform in the early 2000s. While it started as a discussion board for various topics, it quickly began to be used as a marketplace as well. As other social channels, like Facebook, Twitter, Line, WhatsApp and of course, Instagram became popular, they succumbed to the same eCommerce fate.

He noted, “As long as an online channel can be used to post a photo and text together in a practical way, and can be used a conversational platform, it will almost immediately become a market, if it’s not already.”

On top of everything, it’s also an easy way to get started. Aulia explains, “It’s much easier to create a catalogue on Instagram that creating their own website. All you need is a smartphone and an internet connection.” 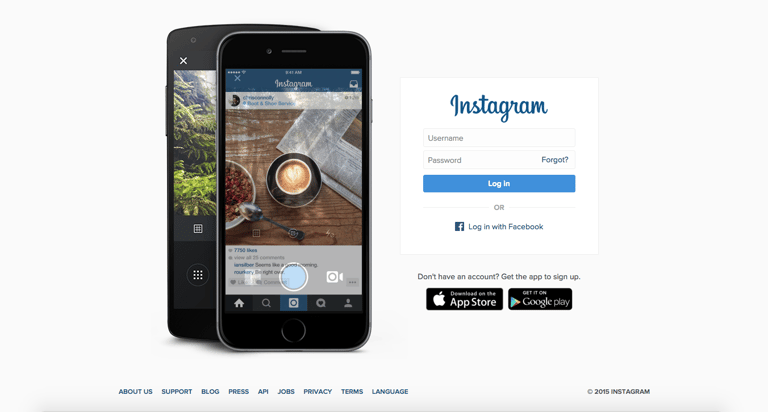 There is a market

And for those in the apparel and accessories industry, they’re especially in luck - Indonesians shop online across multiple categories, but apparel is the most popular. 61.7% of online shoppers made an apparel purchase in 2014.

It seems that where people in other countries see Instagram as another place to post cute outfits, culinary adventures and brunch, Indonesians are seeing an opportunity to rake in the big bucks.

Big fashion brands use Instagram as a showcase and to direct traffic to their site, while smaller brands sometimes don’t even have a store and only sell on Instagram. Selling on Instagram makes them able to compete with the bigger guys by reaching the same audience and allowing customers to buy directly through their Instagram account.

These Instagram sellers are taking advantage of a gap in the market. Rather than waiting to have their labels featured, or waiting for their brand to get big enough to attract its own site traffic, the sellers create their own space within the bigger, established platform.

When it comes to logistics behind the scenes, these sellers also aren’t relying on traditional methods. Many of the smaller shops keep track of inventory manually, holding Skype conversations between partners to update inventory weekly. For shipping, many sellers simply use local mail service.

So, how do all these masters of Instagram get paid? While in many other parts of the world, it might feel shady to conduct business over an SMS, or to complete a sale by making a bank transfer, in Indonesia customers actually prefer these methods.

Bank transfers are the preferred method of payment. Friends and colleagues are usually the first customers for these Instagram accounts, so trust in the seller is inherent from the beginning. Then, popularity grows through word of mouth, and friends of friends. Having some degree of knowledge of the seller keeps that level of trust needed for bank transfers.

That said, trust in credit/debit cards and therefore willingness to use these methods of payment has been on the rise for the last five years. With new marketplaces like Zalora and Lazada becoming more popular, credit card use is also increasing. In 2014, only 5% of the population owned and regularly used a credit card. And most of these credit card users were from bigger cities on Java, such as Jakarta.

However, recently Bank Central Asia (BCA) released a report saying they expect credit and debit card use to increase greatly in the next year - up to 80%. By the end of the year, BCA has seen a 127% increase in credit card usage in 2015, compared to 2014, and expects growth to continue in 2016 between 50% to 80%. Promising stats for credit and debit cards.

Having a direct line of communication to the sellers has also changed customer service. In one survey, around 74% of respondents who sold on social media said they responded to a customer’s comments immediately.

Line has become a huge provider when it comes to customer service for social media sellers. In fact, they’ve created Line@, which is a specific service for eCommerce.  This is the nature of social media - the immediacy and accessibility inherent in the platforms improves communication lines between customer and seller.

The life of a seller

Ajeng Ika Nugraheni and her business partner Dhatu Rembulan are one example of Instagram sellers who have found success by starting to sell their own brand on Instagram. These two women and mothers saw an opportunity in the market and started designing clothes that are fashionable, comfortable, and also convenient for other breastfeeding moms. That’s the great part about starting a business on an Instagram account - sellers are able to sell what they want to produce, rather than having to conform to the market. In this way, they create demand, not the other way around.

Ajeng and Dhatu got their start by selling to their friends through Instagram. Dhatu was already a well-known figure on Instagram (currently she has 79K followers), so she was also able to market their brand to a large audience right away. Things got up and running quickly.

Their clothing line is now in negotiations with one of the biggest marketplaces in Southeast Asia to open up their market even further. For now, they use Line and Whatsapp for online orders, and are building up their website. They only accept bank transfers and paypal for payments, and have Skype meetings to connect the two women who live separately in Bandung, Indonesia and Singapore, covering these two markets. In weekly calls, they check inventory levels and decide what new orders to make. All this expansion began from a simple Instagram account.

The life of a buzzer

And what’s a typical day like for a buzzer, those highly influential accounts on social media? I caught up with Anggey Anggraini, a serious presence on Instagram in Indonesia. She has two Instagram accounts, one with 27.2K followers and another with 37.1K followers and counting! She’s a big influence in the Instagram space. She says being successful is all about being authentic from the beginning.

Anggey explained how she got her start, “I just want to share things that I do love passionately and be unique among the other users.” She says she became an influencer naturally, just spending a few hours a day making sure her images were eye catching and being active. She also thinks it just takes a bit of traction to get things going.

Companies find buzzers either from recommendations from PR and digital agencies, other buzzers, a buzzer database, or just noticing that a certain account has a good following. Brands email the buzzer a campaign brief, along with expectations and compensation, and then it's up to the buzzer to decide whether or not to enter into an agreement.

Sometimes, brands create buzz for each other. Several small businesses that have many followers on Instagram collaborate on a campaign together and promote products across all their Instagram accounts.

Compensation runs from free clothes to hundreds of dollars per post. The amount is usually set by the buzzers themselves, or their influence in the market. Much like more traditional marketing methods, buzzers can measure their success by engagement - likes and comments on each of their posts.

Buzzer, seller or buyer, each plays a role in this Instagram eCommerce system.

The sky's the limit

No, really, the sky is literally the limit on things being sold on Instagram, and that’s probably only because Indonesians haven’t figured out how to sell pieces of the sky yet. Name something you want to buy and you can probably get it. Some accounts sell snacks and condiments from other countries. Some accounts sell human teeth (most likely for orthodontists and dentists to practice on, but still, you gotta wonder where those came from). Others go for selling exclusive, unique items. For example, since Line is huge in Indonesia, there is one Instagram account that sells Line stickers that can’t be downloaded elsewhere. There have even been instances of accounts selling babies, but those are usually stopped and pursued by the police, thankfully!

“Indonesian entrepreneurs set up shop where they think there is a lot of “foot traffic”, he explains. "If sellers find that Instagram no longer has a viable market, they will leave and establish themselves elsewhere. Otherwise, they’ll stick around.”

Will all this selling on social media replace conventional shopping, or even regular eCommerce? It remains to be seen, but for now, it seems like Instagram is another legitimate channel to add to the eCommerce mix. With the rise of eCommerce platforms like Lazada, Zalora and MatahariMall, the trend may make a shift. But meanwhile, these masters of Instagram are showing they deserve a growing piece of the eCommerce market. If these sellers have inspired you to get in on the social selling frenzy, here are some of our tips to get you started.

Want to learn more about Indonesia and the Southeast Asia eCommerce market in general? Download our eBook for more information.