TradeGecko’s inventory and order management software will help you automate your workflows so you can focus on growing your business.

In GetApp’s ranking of category leaders for the last quarter of 2017, TradeGecko has been ranked in the top 5 for Inventory Management apps, outranking 20 competitors. 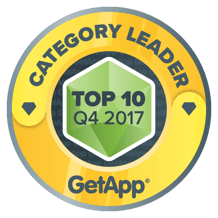 “TradeGecko has been a mainstay in GetApp's Category Leader ranking since Q3 2015, ranking in the top 5 for the 9th consecutive quarter. Coming in strong at #4, TradeGecko's biggest contributor to its ranking is a score of 18 for reviews, with an average rating of 4.4 out of 5 stars. An additional 17 points for software integrations and 15 points for its security protocols totaled an impressive overall score of 60, solidifying its spot as one of the leading Inventory Management solutions in the cloud,” says GetApp researcher Suzie Blaszkiewicz.

Whether you’re a first-time software buyer or a business looking to make the switch from one product to another, Get App’s Category Leader rankings give a comprehensive list of the top solutions using a unique, five-factor scoring methodology. Each factor is worth 20 points each, for a total score out of 100, and include:

Based on the number, average rating, and recency of reviews.

Constant software updates mean that reviews don’t have an infinite shelf life. The more recent product reviews are, the better a software’s score will be. GetApp also incorporates reviews from their sister sites Software Advice and Capterra for even more data.

Based on native integrations listed on GetApp, the availability of an API, and Zapier integration.

GetApp knows that building native integrations with hundreds of apps isn’t always possible, and often times unnecessary. That’s why they’ve added a component to the scoring giving weight to integration with popular integrations platform Zapier, as well as an additional point for having an open API.

Based on the availability and rating (from Google Play and App store) of an Android and iOS app, or the mobile responsiveness of its web app.

Not every cloud-based software has a native iOS or Android app, and that’s okay– not every software needs it. But mobile adaptability is still an important component, which is why an additional five points were allocated for software with a mobile compatible site.

Based on the number of followers on Twitter and fans on Facebook. Social media presence ties in significantly with an app’s SEO.

Media presence is an indication of how closely a software engages with its community and how well it communicates both good news, such as software updates and improvements as well as downtime in the app, and bugs that are affecting its user base.

Based on an app’s security determined by a security survey developed by GetApp, modeled on the Cloud Security Alliance self-assessment form.

Software providers need to provide transparency and assurance of their cloud services to corporations and end users, who are increasingly requesting visibility into the security controls provided by various cloud computing offerings.

This scoring system ensures that the ranking is completely independent of any commercial relationship that GetApp has with software vendors. Starting in Q1 2017, GetApp added additional components to its scoring methodology to provide even more valuable data to the ranking. 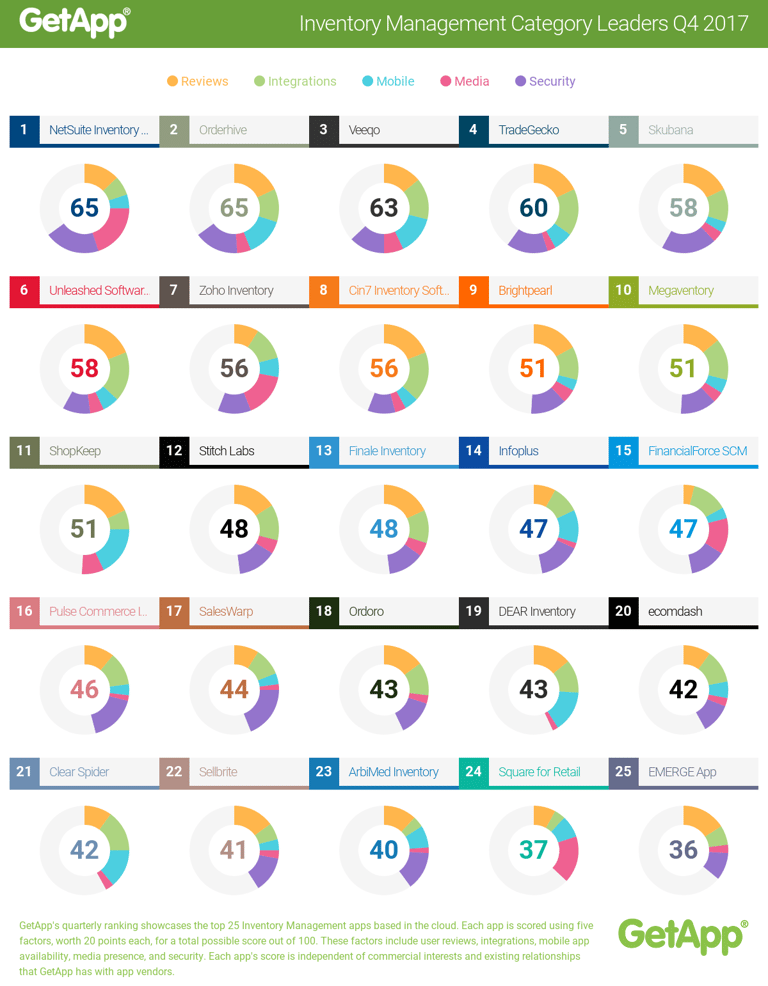 This list can be used as a point of reference, from which software buyers and small business owners can get a good sense of the market landscape when deciding on an Inventory Management solution.